The Lodger by Louisa Treger

Available in Hardback, Paperback, and Kindle.

A fabulous historical Debut novel. Each page is a Masterclass in writing

Louisa Treger’s debut novel set in the 20th Century is a cross over between an historical account and fiction, centres around one of the lesser known writers of this time Dorothy Richardson and her rise from dentist secretary to literary pioneer.

This is a well-researched and superbly written book. The complex life of Dorothy Richardson centres on her affair with H.G. Wells who is married to one of Dorothy’s old school friends. Bertie as Wells is known as takes centre stage through much of The Lodger. But there is another story here that the reader comes to terms with and that is the sexual awakening of Dorothy at a time when women where fighting just to vote. Now we Dorothy strike up a friendship with Veronica, and we find out that Veronica is no ordinary woman, the two strike up a close friendship that includes deep trust in each other and secrets of their adulterous affairs are shared. After a time this transcends into a complex relationship that becomes physical despite Dorothy still seeing ‘Bertie’ now things become more complex and disturbing for Dorothy as she now finds herself pregnant.

During this stage of the 20th Century the fact that here we see Dorothy involved in an affair with a married man, now pregnant with his child and also an affair with another Woman, this would almost certainly mean Dorothy becoming an outcast in society, disgrace and complete ruin. Just to make matters worse Veronica is incarcerated for protesting as a suffragette protester. Dorothy is riddled with guilt over her affair with Bertie and betraying her best friend add this to the remorse as her mother’s suicide and her feelings that she could have prevented this.

Locked in her attic bedsit every evening Dorothy emptied her thoughts and poured her heart out filling notebooks and so in time came the multi-volume ‘Pilgrimage’ which was based around the character Miriam Henderson and this is based on the authors own life between 1891 and 1915.

The one aspect of The Lodger that really appealed to me was the way that Treger does not in any way get to point the finger of blame to anyone that the reader can see, this is something each reader will come to have their own thoughts and to make up their own mind.

The style and prose of The Lodger is impressive, bordering on poetic each page moves easily to the next and keeps the reader engaged in the story. Beautifully written and poetically told. How Treger follows The Lodger is something that I will be watching very keenly. 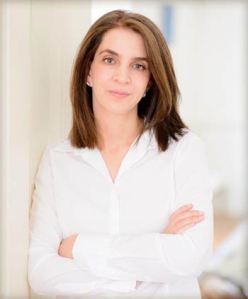 Born in London, Louisa Treger began her career as a classical violinist. She studied at the Royal College of Music and the Guildhall School of Music, and worked as a freelance orchestral player and teacher.

Louisa subsequently turned to literature, gaining a First Class degree and a PhD in English at University College London, where she focused on early twentieth century women’s writing.

Married with three children, she lives in London. The Lodger is Louisa’s first novel.