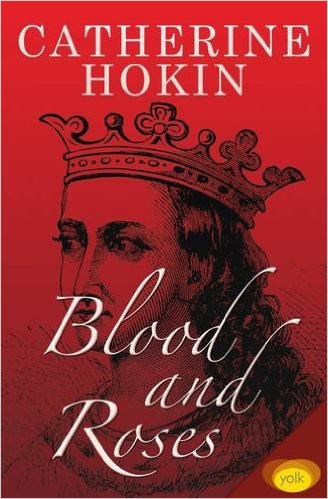 Blood and Roses by Catherine Hokin

The life of Margaret of Anjou now uncovered in an epic novel from a dark period of history.

‘The English have always thought of me as French. They have called me a French Princess not an English Queen and hated me for it no matter how much I felt and protested my loyalty to them. Well then, I shall be what they hate.’

In her debut novel Catherine Hokin attempts to uncover in Blood and Roses the life of Margaret of Anjou (Marguerite d’Anjou) in a fictional account of a dark period in history and the sparks that started the War of the Roses.

The story starts with the exiled Margaret of Anjou sent into exile in 1481 and imprisoned she is setting the record straight by writing her own life story. As it turns out history will not forget Margaret of Anjou.

She is to be the wife of Henry VI, and as she enters the court of the king the storm clouds are gathering over the court of Henry VI. The story covers the periods between 1435 to 1480 and the dynasty of the throne the backdrop being the bloody battles that took place that we know as the War of the Roses.

What Catherine Hokin attempts to uncover here is her story the French Queen born to rule but denied to the right and the protagonist to the War of the Roses. A gripping fictional account of a Queen refused the right to rule married to a King regaled as a saint. What they don’t realise is that Margaret is a strong and determined woman.

The failed attempt at conceiving a child and heir to Henry VI, we learn of Margaret acquiring the services of a husband of one of the women attending her and conceives a son (Edward). Henry is rarely seen because of the severity of his illness she slowly starts to assume control of the throne but the storm is gathering with plots to take the throne by force if required. Behind the plot is Richard, The Duke of York.

The is played out among the bloody battlefields of England and the stakes are high, the throne, the nation. Margaret will do anything to keep this and what of her son?

The research by Hokin is meticulous and she turns Blood and Roses into an epic historical work of fiction on the life of Margaret of Anjou, wife, queen and mother and leader of the Lancastrian forces in the War of the Roses a remarkable read that had me transfixed from the start.

If you think history is tedious you should read Blood and Roses an outstanding debut novel on a remarkable if much wronged woman.

My thanks to Caterine Hokin for a copy of Blood and Roses in return for a review.

Blood and Roses by Catherine Hokin published in paperback on 11 January 2016 by Yolk Publishing.