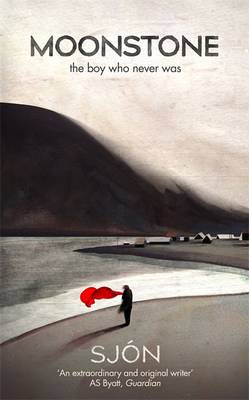 Moonstone – The Boy Who Never Was – Sjón

The author Sjón whose full name is Sigurjón Birgir Sigurðsson has been involved on the Icelandic literary scene since the 1970’s and also best known for the collaboration with the Icelandic singer Björk but I am asking myself how it is I have not yet previously discovered his writing before now.

The year is 1918 and Europe is embroiled in the latter stages of World War One. Moonstone – The Boy Who Never Was is set in Reykjavik and its central character the 16-year-old orphan boy Máni Steinn who at night dreams of the cinema and during the day has sex with men for Money. Due to the Great War Iceland is short on food and coal and people are living hand to mouth on a daily basis. But life is about to get a lot worse for the inhabitants of Reykjavik.

That alone may put off some readers but would strongly advise you to read Moonstone it captures Iceland at a moment in history where life and death stalk everyone, like a time capsule the writing is poetic in nature.

Young Máni lives day to day flitting between the two main cinemas in Reykjavik and the money he earns pays for his dream. He is transfixed by the enigmatic Sóla G who seems to spend her time riding around on a motorbike in black leathers. Has she ridden straight from the silver screen into the young man’s life. She really has film star look and adds to the dreamlike state that Máni finds himself in.

The sky above Reykjavik are dark as volcano Katla spews it contents into the air and then to add to the gloom a Danish passenger ship arrives carrying an even deadlier cargo. Spanish Flu has now arrived in Reykjavik and suddenly death lurks in the shadows and no-one is immune. Máni goes about his daily rounds ‘earning’ his money through his encounters with other gentlemen.

As the Spanish Flu takes its toll and the death toll mounts to shocking proportions the main characters are recruited to make house visits and take the dead to the morgue. This is at times a difficult read but it is so profound and poignant. By the time I have read this very short book I too had felt I had been part of a dream like state but that is exactly how Sjón writes. Striking and noticeable Moonstone will capture the reader and it will be read in one sitting. Although a work of fiction the historical accounts of the time are not missed. Moonstone is a masterpiece of writing. It is only at the very end of the book do we really find out the true meaning of this incredible story.

There are times when a book comes along and will haunt you and get inside your head for days afterwards, this is one of those books. An absolute delight to read and pleased to say will convert many like me to the writing of Sjón.

Thank you to Sceptre Books and Bookbridgr for the review copy.

Moonstone – The Boy Who Never Was by Sjón and published by Sceptre on 2 June is available through Waterstones and all good bookshop.