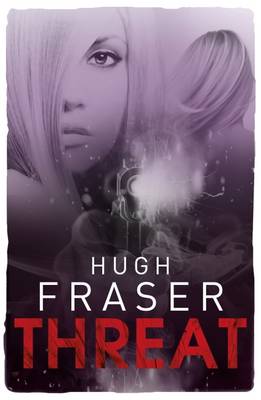 Fans of the Agatha Christie’s Poirot TV series will remember Hugh Fraser as Captain Hastings but did you know Hugh Fraser the author with his latest novel Threat this is his second novel and believe me this is pretty exceptional.

I have not yet read Hugh Fraser’s first novel Harm but his latest offering Threat is a sequel to this but don’t worry if you like me have not read his first novel as this reads like a standalone book.

The story set in London in 1961 and Rina Walker is a 20 – year-old hired assassin with a mission for hire. The story opens with quite an explosive start which really gets your attention. Rina is a young woman with attitude, a feisty fighter of a woman that you would not want to cross in any situation. Rina is hired by Tony Farina who is Soho’s vice king to track down missing girls that have been ‘working’ at some of his clubs. The one aspect of Fraser’s writing is how he describes London during this time, accurate and detailed from the sleazy back street clubs to the pubs were the furniture is nailed to the floor as could be some of their undesirable clients that frequent them.

Rina not only has her safety to look after but Georgie who is living with her and when she confronts a leading killer this puts Georgie in real danger. In Threat the tension is palpable and the body count rises with each chapter. This is a no holding back thriller gripping and taught from start to finish some the detail may be shocking but remember this is London in the early 1960’s and there is no hiding from what really went on then.

Rina really has a rather special skill set that sets her apart from most other young women who were enjoying the swinging 60’s at the time. She hides money in some rather interesting places for those moments when ready cash is needed. But now she is on collision course and there is more at stake then she realises. From here Rina has to deal with some the lowest form humanity that involves a member of the establishment throw in corruption, MI6 and the KGB as well as a Nazi war criminal and you have a recipe for an all action thriller that will leave you breathless. The leading characters will leave a mark on you and you will judge each one as they play their role.

This is my first Hugh Fraser novel and will not be the last. This is an exceptional and a well-crafted book. I highly recommend this for those who like their thrillers holding nothing back.

Thank you to Urbane Books for a review copy.

Threat by Hugh Fraser published by Urbane Books on 23 June and is available through Waterstones and all good bookshops.

Normally I do not review children’s books but there is some rather special about The Curious Fox by Ross McDonagh. It is beautifully illustrated by Conor M. O’Brien and will really appeal to children of all ages.

The story is of a fox cub who wakes one morning and something “Puzzling on his mind” and so begins for our fox cub a journey of discovery. Told in rhymed verse the young fox meets various wild creatures in the Irish countryside as he tries to understand what makes him different to everyone else. On his journey he meets a Giraffe, a Peacock, a Pig and Crocodile to name but a few.

This is a delightful and charming little book consisting of 32 pages with a message that all children will at some point be thinking and asking. Our delightful little fox learns a lesson that he will carry with him forever as well as meeting some wonderful new friends.

The Curious Fox will delight parents as they read it to their children and it is a book that one day their children would pass on the message. The message contained within may be a lesson than some grown up’s need to learn in these troubled times.

It is beautifully illustrated by Conor M. Obrien who worked on the IFTA-award winning Geist and CBBC Go Jetters and Emmy nominated Octonauts.

Thank you to Pamela McLoughlin for a review copy of The Curious Fox.

The Curious Fox written by Ross McDonagh and published by Veritas and is available through Amazon.