As part of the Vita Brevis Official Blog Tour I am delighted to welcome to the latest in a series of Meet the Author interviews Ruth Downie to talk about her latest novel Vita Brevis which is has just been released by Bloomsbury and is available through Waterstones and all good bookshops.

Ruth Downie is the author of the New York Times bestselling Medicus, as well as Terra Incognitta, Persona Non Grata, Caveat Emptor, Semper Fidelis and Tabula Rasa. She is married with two sons and lives in Devon.

Congratulations on the release of Vita Brevis just released now out in hardback the 7th book in the Medicus series, can you tell you tell us a little of what Vita Brevis is about?

Thank you! It’s a story featuring the regular characters of the series, Roman legionary doctor Ruso and his British partner Tilla. Most of the other books have been set in Britain but this time they’re in Rome, where Ruso takes over what he thinks is a reputable medical practice only to find a dead man in a barrel on the doorstep and a message saying, “Be careful who you trust.” 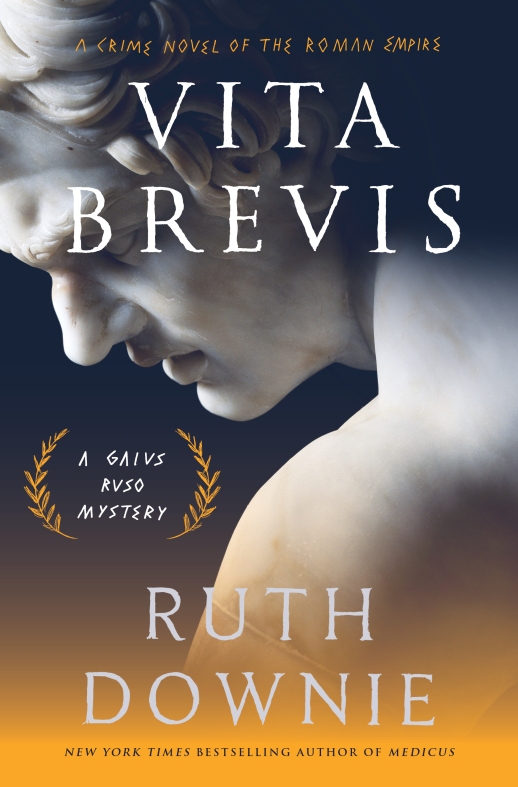 I guess the question you must have been asked many times why a series of crime novels set in the Roman Empire?

To my shame, even though I went to school in Colchester—which was the first Roman town Boudica burned down—I never realised how fascinating the Roman Empire was until we took our children to visit Hadrian’s Wall. Right on the line of this stark barrier between Roman and Barbarian, there’s a caption in the Housesteads museum that reads, “Roman soldiers were not allowed to marry, but they were allowed to have relationships with local women”.

I felt this raised rather more questions than it answered, and since the only record we have of any of these ‘local women’ is the occasional name on a tombstone or a curse, there were plenty of tempting gaps to fill with fiction.

As for the crime element—I have to admit that when my agent looked at my proposal for a rambling tale of passion and conflict, she handed it back with, “Much too much plot, and put a crime in it.” She was absolutely right: crime fiction gives a writer the chance to explore all sorts of interesting things while providing a structure that means you can’t ramble on indefinitely. At least, I hope not.

The two leading characters are Ruso and Tilla now have a baby daughter. How have you managed to keep the couple so engaging with your readers?

Good question! Having been largely brought up on a diet of “and they got married and lived happily ever after” I was afraid that once characters became a couple, they’d be less interesting. Then I realised that there’s always going to be at least one other party causing tension in their relationship: there’s Ruso’s commitment to his duty, and for Tilla there’s the tension of not wanting to betray her own people while feeling herself sliding into collusion with the occupiers. I was also worried that once they had a baby, one of them would end up doing all the detecting while the other one had to stay at home and babysit. So that’s one of the issues they tackle in the book. 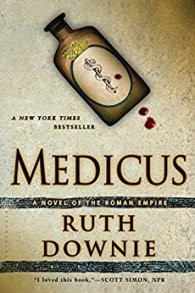 How difficult is it to write a series of crime novels set against the backdrop of ancient Rome? What would you say are the main challenges you face as far as research goes?

The good thing about it is that Rome had no police force in the sense that we understand it, so nobody’s going to be asking “why don’t they fetch the police?” when things get a bit tricky—always a problem when you’re writing about an amateur sleuth.  It’s also a relief to know there are no present-day police officers out there clutching their heads in despair at my inept grasp of their procedures. (Although there may be a few classicists, of course.) With no mobile phones to call for help, it’s relatively easy to get your characters into trouble.

On the other hand, it takes ages to get anybody anywhere and when you need to send a complicated message, you have work out how fast the ship/horse/runner can travel, and then allow for the weather. This used to be a nightmare until some kind souls at Stanford produced an interactive website showing exactly that – http://orbis.stanford.edu/  I’m sure they have no idea of the joy they’ve given to a lot of writers.

The real challenge of research, I think, is that in order to create a world that you—and hopefully some readers—can believe in, you need to check out all sorts of things that don’t go in the book, but are necessary to underpin what does. Who’s in charge? Where does everyone’s food come from? Who’s really in charge? What language are they speaking? Who are they afraid of? How are the houses built? What do the door-latches look like? Are there sheets on the beds? (You’d be amazed at how much time I wasted on that one.)

In fact, please can I rescind the start of that last paragraph and put it here instead? The real challenge of research is knowing when to stop playing about with it and get on with the writing 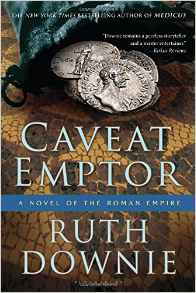 Where do you carry out your research and then write your books, would it be that you spend time in libraries and museums to get the inspiration for your next historical crime novel?

I did all of my early research through libraries and museums and visiting sites—basically anything that didn’t cost a lot of money or involve talking to people, because I was too embarrassed. Since then I’ve learned that people who have expertise are often incredibly generous and helpful. There are also some excelllent courses available online now, many of them free. Anything Ruso knows about the abdomen or the upper limb has been learned from anatomy lectures on the internet—although he’d be amazed at some of what’s in my notes, because he’s restricted to the knowledge that was around in the second century. Luckily we still have many of the textbooks that would have been available to him, so there’s plenty of information to draw on.

Another great resource is experimental archaeology and re-enactment groups. The best of them are meticulous in their research and it’s always inspiring to walk into ‘real’ houses and to meet people who make and wear the kit, use the weapons (carefully!) and cook the food.

Ideas for new stories, though, usually come from a place. The third book, where Ruso and Tilla visit his family in Gaul, started out with a visit to the amphitheatre at Nimes. I couldn’t think of anything new to put in the arena but the maze of corridors and stairs below the seating was just crying out for a chase scene.

I talk to a lot of writers about their writing process and the one question I have to ask is are they a night or a day writer. Do you have a quiet place to write?

Well I’m definitely not an early morning writer! As a deadline approaches the work carries on later and later into the evening and when things are really desperate I sometimes decamp to the library during the day to get away from distractions. At home, though, I’ve progressed from a desk and a noticeboard in the bedroom to a whole room full of books and stuff that isn’t really junk. Honestly. 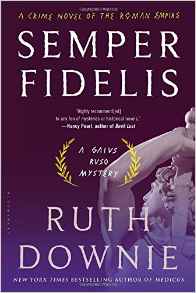 I seem to have burrowed down into the reign of Hadrian without ever really intending to, but it’s a good time to write about because so much was happening. He was a man of wide interests and vast energy who travelled about the empire inspecting and improving things. (Whether people wanted them improved, or not.) There are also tantalising scraps of evidence about a crushed rebellion in Britain at the start of his reign—just enough to make my Britons very resentful but not so much that I have to write battle scenes, which I couldn’t do at all.

As for my favourite Roman—Hadrian was a gifted emperor, but he comes across as a bit of a know-it-all. I’d go for his wife, Sabina. We don’t know much about her, but around about the time he was visiting Britannia, she was involved in some sort of scandal with his top men.  This was great news for me because Ruso and Tilla could get involved in it.  Apparently he told people she was moody and difficult and she said she refused to give him children because any child of his would harm the human race. Despite this bracing honesty, they were together for decades and the marriage only ended with her death. I’d love to have met her and asked how they did it.

I was reading through your website and you have taken part in some archaeological digs. How important is this to you and is there one site dig that has been important to you?

The fascination of Roman Britain for me is that it isn’t some ‘other place’. It’s here, under our feet, shaping the roads we drive along and the cities where lots of us live. For many years I was privileged to be part of a community group excavating a Roman villa site in Northamptonshire—you can see more at www.whitehallvilla.co.uk. I’ll never be a classicist or an historian but I know what substantial chunks of Roman Britain feel like when you pick them up and scrape the mud off them. And that, for me, is priceless.

What are you reading at present and do you have a favourite writer?

I’m currently enjoying Tony Dixon’s Bristol Channel Gypsies – the story of the lifeboats that used to patrol the waters near where I live – http://tinyurl.com/z8teu62 and Jasper Fforde’s The Eyre Affair. http://tinyurl.com/jjxz62b

With Vita Brevis now out in the shops have you started to plan your next writing project?

Oh yes. It’s the eighth book in the Medicus series, it’ll be set in Aquae Sulis (modern Bath) and my editor is expecting it on 1 November. So I may be spending a lot of time in the library this month!

My thanks to Ruth Downie for joining me on Meet the Author. For those wishing to learn more about Ruth’s novels you can visit her website Ruth Downie.com and you can follow Ruth on Twitter @ruthdownie

Vita Brevis and all of Ruth’s previous novels are available at Amazon.co.uk/VitaBrevis

You can follow the Official Vita Brevis Blog Tour:

One thought on “Meet the Author – Ruth Downie”