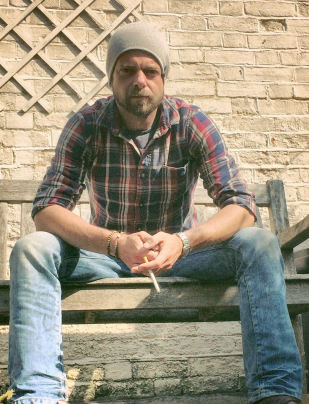 Today I am delighted to welcome J.J. Patrick as a guest on my blog talking about his writing and about himself also his book Forever Completely which was published in September by Cynefin Road.

James once did a good thing. He now lives a quiet life and is happy with his lot, which is all that really matters. He’s been compelled to write ever since he can remember.

J.J. Patrick — or JP to those who know he’s nothing but trouble — was born in the New Forest and did most of his growing up in Derbyshire.

He served as a police officer for ten years, resigning from New Scotland Yard having acted as a whistle-blower, kicking off a parliamentary inquiry into the manipulation of crime figures by the police. He received open praise at the highest levels for his integrity.

At a bit of a loose end — largely being seen as an unemployable risk to skeletons in closets everywhere — he opened a pub. Wrestling a road closure, along with his own demons and ghosts, he was bankrupted and lost everything in the spring of 2016.

If you knew him, you’d say that the broken pieces fit together much better nowadays.

Should you wish to keep up with his often ludicrous and frenetic antics, you can find him on Twitter as @j_amesp

Forever Completely is an unapologetically unique debut by J.J. Patrick, set in a haphazard world of love, psychopathic primates, hodgepodge witchcraft and the apocalyptic end of mankind.

He doesn’t matter. That’s how he feels, writing a bitter note on a Saturday morning. He’s lost his relationship, gone bankrupt and lives in a drug infested sink estate…until he’s shown a vision of the end of the world by two ancient deities.

Join a lovelorn mess of a man as he is forced to face up to what he deserves and save the Earth, with the help of a nice old dear and her collection of eye-popping tracksuits…

“A brilliantly haphazard, broken glory all of its own. Forever Completely is utterly unashamed of itself…”

“I can’t compare this book to anything because I have never read anything like this before. Witches, the apocalypse, love, hate and redemption. I don’t usually read fantasy fiction, but the author makes an unbelievable world so believable that I didn’t want the book to end”

“This deserves to sell a million and be made into a film, top drawer stuff. Reading it was the literary equivalent of smoking a joint, drinking five pints of scrumpy, listening to early Pink Floyd with Syd Barret while watching Saving Private Ryan.”

Forever Completely is available worldwide now. You can find it listed on all online retailers and distributors in hardcover, and in all ebook formats including Kindle, Nook, iBooks, Kobo, Booktopia…and everywhere else.

About Life and Writing:

J.J. Patrick was serving as a police officer, working as a specialist analyst for Scotland Yard, when he uncovered the mass manipulation of crime figures by the police service, to make it look as if serious offences including rape were reducing. Despite being disciplined and threatened with dismissal for raising concerns he approached Parliament and sparked the Public Administration Select Committee inquiry into crime statistics. As a result, police recorded crime figures were stripped of their status as a trusted national statistic and the Home Secretary and Prime Minister made commitments to improving the protections for whistleblowers. In the final parliamentary report he received the highest possible praise: “We are indebted to PC Patrick for his courage in speaking out, in fulfilment of his duty to the highest standards of public service, despite intense pressures to the contrary”. He retired from policing in May 2014.

After a year of struggling to find work, he managed to privately pull together some money and took on a dilapidated public house in Essex. The building was first constructed in the 1700s had been in steep decline for many years but he took on the renovation work himself, transforming the building inside and out, working gruelling eighteen hour days before opening the doors on the new pub in April 2015. However, all was not to be plain sailing. Due to the years of adverse pressure his marriage collapsed in September 2015 and then, in October, Essex Highways closed the road on which the pub stood for four months and the business simply could not survive. In March 2016 he closed the doors for the last time and was bankrupted on March the 17th. He lost his business and his home in one day. He was left broken and had his heart broken not long after.

With help from his father, he managed to secure a bedsit in Colchester and found work as a gardener. Talking about this period, he says: “It’s a bedsit, and not a good one. I can’t describe the horror of lying in the dark, listening to the sounds of an alcoholic Scot screaming and urinating on the floor directly above, leaving you to wait for his bodily fluids to seep through the plaster and drip into your space. Between the 29th of March and the 28th of May this year I was paid £570, out of which I had to pay my phone bill, so I could talk to my kids, and £380 rent for the room. You can’t even get a payday loan when you’re bankrupt and I’d run out of things to sell so I lived on crackers, despite the job being physical, and eventually had to resort to accepting charitable offers from people as the effects of malnutrition set in. I had no body fat at all by May. There comes a time when you take a look around and realise you are fucked. You reside in a hovel, well below the breadline, and you aren’t living. A useless fucking charity case, you’re just looking for a way to survive. There is no near miss, you are either destitute or you’re not. I was and it’s fucking awful”. He has chosen to donate 10% of the proceeds from Forever Completely to charities supporting people in poverty.

James turned to writing as an escape from his surroundings, each day returning from work and sitting until the early hours writing, bleeding at the typewriter in the best tradition of Hemingway as he desperately tried to survive. “Within a week I was staring at the rough draft of Forever Completely, and those 30,000 words saved me. By the end of May the final draft was done and when I tentatively sent the manuscript out to beta readers I started to believe the magic in that story could do more than take me away from my soul-crushing surroundings. More than provide a waking dream. I saw a way out and played my usual game of Kipling’s pitch and toss, one of the reasons I get affectionately referred to as the walking embodiment of If”. There was a desk in his room but no chair, so the whole book was written with James sat on a scraggy sofa, pulled up close the keyboard with two cushions underneath him.

On writing itself he is no less awkward than he was as a police officer. He has clearly defined problems with rules and embraces his inner anarchist at every given opportunity. “Writing FC wasn’t catharsis, not really. It was just survival, plain and simple,  and I wouldn’t still be here but for its grace. I certainly can’t say I used it as a device to create order either, the work itself is chaos because life is chaos. Love is chaos. Redemption is chaos. And I’m not exactly famed for obedience or conformity – the chair of the Public Administration Select Committee once described me as ‘Awkward’. My approach to writing is no different really. The internet is awash with reams of sanctimonious shit about writing. Endless rules about what must be done, how you should behave, what you must show and what you must tell. The fact adverbs will bring about the death of your story and end your writing life, by leaving you open to broad ridicule. Don’t say anything other than said, use everything but said. Don’t use was but also shy away from complicated words, simplify your prose. Cut, slash and burn. Don’t over describe but also see show don’t tell, in the first sentence of this paragraph…Avoid the ellipsis at all costs, stick to the Oxford list, and murder your darlings. The cobblers is almost infinite, in the main self-righteous, and, worst of all, utterly meaningless. So my advice is stop worrying about it, sit down, and write. There aren’t ten rules. There aren’t any at all. Everything is subjective, the whole industry – from writing, to editorial, to publishing. One day a story will be great, then a bus will get missed, a cat will die, or someone will feel grumpy, horny, angry – whatever – and the same tale will be in a slush pile. If you are writing to run from people, good. Hide away and build a world you’re happy in because somebody else will be happy there too. If you are writing because you love people, good. Let everyone know why and share it.”

J.J. Patrick refuses to give up, even though he probably should have, and he is never ashamed to say he came close to the rope once or twice when things were at their worst. But he’s still here because of his two children, whom he loves more than anything else and is determined not to stay down for long. His policing and whistle-blowing memoir, The Rest Is Silence, is being released on the 19th of November 2016 – the third anniversary of the parliamentary inquiry and he’s currently writing two more fiction works, due in the spring and summer of 2017.