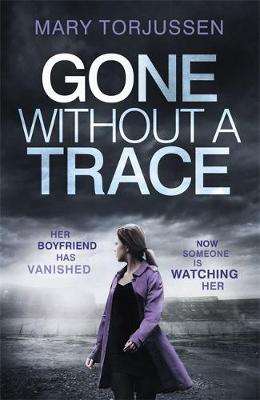 Gone Without A Trace by Mary Torjussen

In early February I was very fortunate to have been invited to Headline’s Blogger Night to meet a number of the publisher’s authors for 2017. I can honestly say it was a great night and a privilege to have been invited. Little did I realise that I was going to meet a writer who lives on the Wirral and just a short walk from the very road I was born. That writer is Mary Torjussen and her debut psychological thriller Gone With A Trace which has just been released through Headline.

I was given a heads up about the story-line by Mary when I met her and the thought of a novel based in and around my home really had me excited. Well when I started reading I did wonder about where this story was going to take me. I need not have worried because Mary Torjussen has written a debut thriller that will have you wondering from one page to another.

The story starts as Hannah is returning to her Wirral home and is very excited with the news she has for Matt her boyfriend. Hannah has just been appointed a director for the company she works for, she even stops off to buy a bottle of champagne to celebrate. Then as she opens the door to her home it is in complete darkness and the silence is deafening and a sense of foreboding comes over Hannah, something is not right. She is right. Something is very wrong. Matt is not there to greet her and in fact it is as if Matt has never existed at all, any trace of him living there has been removed. His clothes have gone, he has even turned the house back to as it was before he moved in and set up home with Hannah. The clock has really been turned back for Hannah, Matt has just vanished into thin air. All trace of their relationship has been removed. But where is Matt? More importantly why has he just gone without a trace. Even his telephone number has been removed and is no longer working all the text messages have gone. Something is very wrong. There is a real chilling feel to this part of the story and Torjussen has played a real blinder here with her leading characters. It raises the hair on the back of your neck.

As the reader is taken along with Hannah as she tries in vain to try and find out where Matt is and why he has just vanished. There is no real sense as to what has just happened and there were no signs of any impending break up of their relationship. This is an addictive storyline and you are trying to second guess what is coming next. There are doubts about Hannah and her friends that will appear to you as this story really gets going not to mention the tension that is palpable. This is a truly gripping debut novel that has a leading neurotic character that you just are not too sure about. It felt like a real crime thriller with so many suspects coming into view. Then the ending just left me open mouthed. Many thrillers will keep you guessing but in Mary Torjussen’s debut she has you on the edge of your seat hanging on for dear life. Just think about that the next time you arrive home from work as you put the key into the lock and open the door.

Gone Without A Trace by Mary Torjussen is published by Headline and is available through Waterstones, Amazon and all good bookshops.