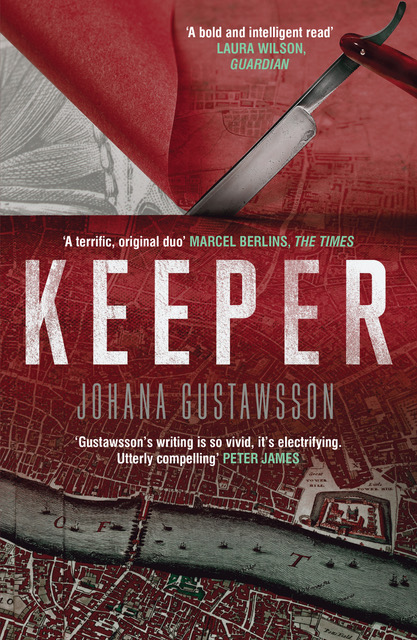 One of last year’s books I really enjoyed was Block 46 by Johana Gustawsson and Johana returns with a gripping and bloody page turner in Keeper (Orenda Books). Sometimes a book will come along and the cover will tell you what to expect and with Johana’s latest it really jumps out at you and so it is that Keeper is just an incredible and compelling. A novel that delves into London’s Whitechapel area of 1888 and Jack the Ripper is terrifying London. Fast forward to 2005 and the Tower Hamlets area of London and a series of murders. It is now 2015 and actress Julianne Bell has been taken. This after a number of murders in London and Sweden that all seem so similar to the murders of 2005. But there is man already charged and jailed for these 2005 murders. So who is now behind these latest copy-cat abductions and murders? Stand by for a thriller that has many twists. Just when you think you have solved the crime, Johana Gustawsson will make you think again.

With the murders of 2005 in the Tower Hamlets area of London seeming so similar to the horrific murders of Jack the Ripper. Is there now a serial killer on the loose in 2015? Was the man charged and jailed the right man or did he have an accomplice who has now struck? Julianne Bell was just getting into her car and now she has gone missing. In Falkenberg, Sweden a woman’s body is found and the murder is a copy-cat style murder from London in 2005.

Two investigators Alexis Castells who is crime author and Emily Roy working for Scotland Yard are in a race to find the killer before he strikes again. They have to find Julianne Bell before it is too late.

Throughout Keeper there are flashbacks to 1888 and the reign of terror by Jack the Ripper who preyed on women who worked as prostitutes in the poorest areas of the East end of London, and his murders were nothing short of gruesome. I just have to mention how Gustawsson really manages to capture the historical true-life crimes and weaves them into a modern day crime novel, and is more than enough to keep you awake at night as it really did for me. A well thought out and plotted novel that deserves many plaudits and accolades. The characters of Castells and Roy we have met before in Block 46 and make a welcome return here along with some new characters that really add to the thriller. I am not going to give any spoilers as to what happens next in Keeper as this is superb edge of your seat read that deserves to be read. I make no apologies in saying you are going to have to go and buy a copy and see for yourself. There are many twists and turns to keep you guessing.

I am a big fan of Johana Gustawsson’s writing and cannot wait to see what we have coming next. Keeper I am delighted to highly recommend Keeper and this will be right up there come the end of the year in my best of the year books.

Keeper by Johana Gustawsson is published by Orenda Books and is published on 28th April 2018 and is available to pre-order through Waterstones, Amazon and your local independent bookshops.

How to follow the Keeper by Johana Gustawsson Blog Tour