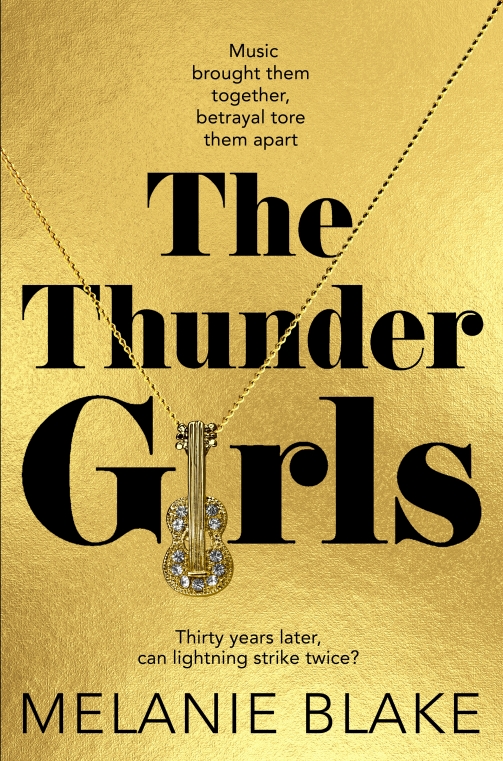 Chrissie, Roxanne, Carly and Anita, an eighties pop sensation outselling and out-classing their competition. Until it all comes to an abrupt end and three of their careers are over, and so is their friendship.

Thirty years later, their old record label wants the band back together for a huge money-making concert. But the wounds are deep and some need this gig more than others.

In those decades apart life was far from the dream they were living as members of The Thunder Girls. Breakdowns, bankruptcy, addiction and divorce have been a constant part of their lives. They’ve been to hell and back, and some are still there.

Can the past be laid to rest for a price, or is there more to this reunion than any of them could possibly know? Whilst they all hunger for a taste of success a second time around, someone is plotting their downfall in the deadliest way possible . . .

Being completely honest I was not sure what I was going to think of The Thunder Girls (Pan Macmillan) by Melanie Blake but I need not have worried. This was a real page turner. If like me, you loved the music of the 1980’s you will love this.

When I think of the 1980’s I think of the music and I was close to the music business back then and I could tell you a few hair-raising stories. It was THE decade, colourful and exciting. The same could be said of the very successful The Thunder Girls. Four women who had the pop in the palm of their hands. Chrissie, Roxanne, Carly and Anita had it all. They were living the dream and loving it all. And then it came to a crashing end along with the friendships that went with the success.

We have heard it all before about pop bands being successful and then it all ends very suddenly. Now fast forward three decades and would you believe it their old label is trying to get the girls back together again but are the wounds still deep or can they be healed by heading back into the studio to record more songs and rekindle the good old days.

Superb fast paced drama being played out and Melanie Blake takes you on a breath-taking rollercoaster of a ride through the lives of the four women, it has it all, success and break-up, to jealousy and much more. There is a list of characters that reads like a Hollywood blockbuster. Don’t get me wrong this is not just a glitzy look at showbiz but also some rather serious themes run through this book, and if you think of showbiz and success and fame just think of the temptations that can be there and then you will see how deep this novel will go.

Over 400 pages but you will not want to put this one down in a hurry. The Thunder Girls packs a punch.

The Thunder Girls by Melanie Blake was published by Pan Macmillan and was published on 11th July 2019 and is available through Waterstones, Amazon and through your local independent bookshop.