The Italian town of L’Aquila suffered a devastating earthquake in April 2009 in which 300 people lost their lives and nearly 2000 were injured let alone the tens of thousands that were forced to abandon their homes. Here is a story set a few years after the disastrous earthquake Bella Mia by Donatella Di Pietrantonio and beautifully translated by Franca Scurti Simpson. 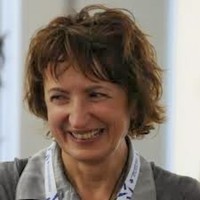 Sitting here writing a review for Bella Mia I am at a loss as to what the people of L’Aquila must have gone through during and after the earthquake and then the aftermath knowing people including loved ones had perished. Sometimes words seem inadequate when lives mean so much more. Yet It is through those very same words that we learn of the pain and suffering and also the long road to recovery and rebuilding of shattered lives. It is also those very same words that we learn in the hope that one day many lives could be saved.

Before the major earthquake that dreadful night there were warnings in the nature of smaller tremors. Then came the big one like a thief in the night that took precious lives and homes and years later people are still coming to terms with the awful events of that April night. For those that lost their homes temporary accommodation was set up. This is a story of loss and what has to follow with the story being narrated by Caterina and event after a few years they are living in the temporary shelters set up Caterina is sharing the ‘home’ with her Mother, and her twin sister’s son Marco. Caterina sister Olivia perished in the Quake, for Caterina the loss is unbearable she was her life and now she is still trying to come to terms and wondering how she can put one foot in front of another and carry on. Olivia was more than just a twin sister she was the best part of me are Caterina’s words that echo through Bella Mia. All the remaining family are still grieving, yet there is one person who is missing and that is Olivia’s husband Marco he left her for another woman and is now taking the blame for Olivia’s death.

Through the story you start to understand the grief that comes with every page the sheer loss and then guilt sets in, why was I chosen to survive and not Olivia, guilt in situations like this is not uncommon it leaves many unanswered questions that hang in the still night air when the pain is at its worst. This is a mournful story as learn that her mother takes fresh flowers to her lost daughter’s grave every day. The pain never eases. Caterina had always looked up to her twin sister, she was more attractive and so much more she had a family when Caterina had chosen a life without a family of her own.

For what Caterina did enjoy was her ceramics she had her own workshop and enjoyed the peace it brought her. Now these past few years she has had to relocate to a new workshop after the earthquake destroyed almost everything. Imagine if you can the daily struggles of life for those that survived the dreadful night, still trying to pick up the piece’s memories are fresh of that night and the nightmares are too common. But life must prevail and go on.

The one moment of this story that brought hope amongst the fear and loss was Caterina hear the call of a Scops Owl it was for the first time since the earthquake she had heard one. It brings hope and optimism that like the Scops Owl life can go one and must go on.

Bella Mia is story that is about the pain and loss following a disaster yet there is more to this story, and that is hope and belief in the very word. It is so incredibly moving to read and very moving. With the translation being so careful and sensitively handled. At just under 200 pages it is a book I highly recommend.

Thank you to Calisi Press for the advanced review copy.

Balla Mia by Donatella Di Pietrantonio is published by Calisi Press and is available through Waterstones, Amazon and all good bookshops.