Behind Her Back by Jane Lythell

When Jane Lythell released Woman of the Hour last year a fictional story based around life at a TV studio it was a break away from the thrillers that Jane had previously written and it really worked. I loved the idea of the story and the characters. I was delighted to hear that there would be a follow up and now just released through Head of Zeus is Behind Her Back and this I loved just as much as Woman of the Hour.

Jane Lythell writes with experience as she was a TV producer for many years so reading Behind Her Back does feel like you are a fly on the wall at StoryWorld. I really enjoyed the main character in Liz Lyon a busy single mother to a teenage daughter Flo.  Now after an enjoyable holiday in Italy she is back at the TV studio but there is a new face that has joined the team. Just who is Lori Kerwell? Liz is such an endearing character you just want the best for her as she works so hard at the station and coping as a single mum with all the daily challenges. The station apparently has brought Lori in to help increase the ratings and therefore increase in profits but Liz feels there may be another reason for bringing in Lori. Something is going on and Liz is not being told.

As you can imagine there are some rather big egos at the station and at times for Liz it is like walking on broken glass as she tries to keep her team happy and motivated and working together. It is not long before the memories of the wonderful holiday in Italy start to fade as realisation dawn that something is going on and that feeling of wishing you had eyes in the back of your head really does come to the fore. Who does Liz really trust at the station now and why was she not told they were recruiting before she left for her holiday. Jane Lythell really has written a brilliant and gripping follow up. If you have not read Woman of the Hour you will want to after reading Behind Her Back. At times it is explosive and will have you turning the pages rather quickly as you will want to know what is really happening. This is quality drama and a slice of real life drama. Jane Lythell hits the right note again with this follow up novel and one I highly recommend.

Thank you to Head of Zeus for the advanced review copy.

Behind Her Back by Jane Lythell is published by Head of Zeus was published on 10th August and is available through Waterstones, Amazon and all good bookshops.

Are you following the Behind Her Back Blog Tour 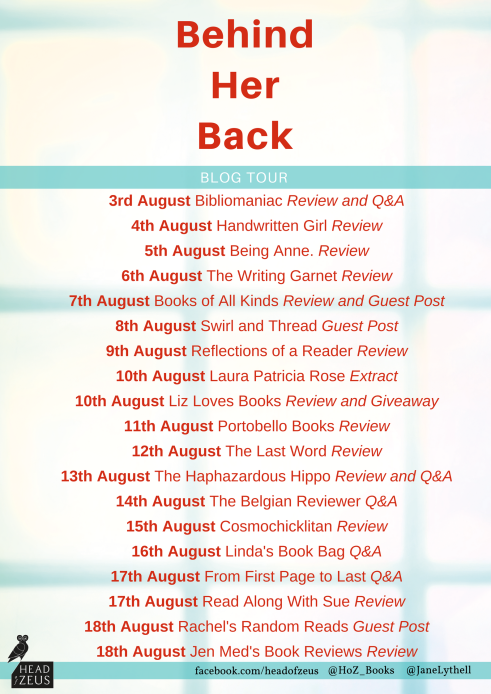