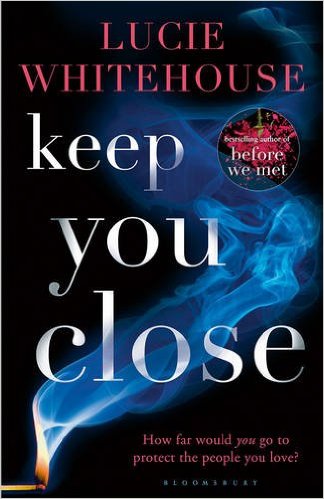 Keep You Close by Lucie Whitehouse

A tense gripping psychological thriller. Accident or intentional? Prepare to be sleep deprived.

You know you have an outstanding thriller in your hands when the book starts and you just cannot leave it alone and that you want to keep going deep into the night. Lucie Whitehouse’s latest Keep You Close does just that. It is gripping and a true psychological thriller.

Marianne Glass has been found dead in the garden of her home and at first it does appear that she took her own life by jumping from the roof and her close friend Rowan Winter receives the telephone call. Despite being close friends while growing up it has been some years since they last spoke. Question is, was Marianne’s death a tragic accident or is there something more sinister behind her death. The news has hit Rowan pretty hard despite the time that has gone since they last saw each other. Their lives went in separate ways since their younger days with Marianne going on to be a very successful artist.

What Rowan cannot believe is that Marianne took her own life, why would she, it does not make any sense. Marianne had everything to live for plus a critical point that Rowan knew from their younger days is that Marianne suffered badly from vertigo. There is detail of episodes of depression that her close friend suffered has suffered in the past with.

The following day Rowan receives a written message in the post from Marianne that sparks Rowan into thinking that there is someone else responsible for her friend’s death.

As Rowan starts to look deeper into her friends past she starts to uncover a past, and the more she looks the darker Marianne’s past looks, just who does Rowan trust, what really happened to Rowan and Marianne’s friendship that caused it to fracture ten-years previous, they were so close growing up.

Some of the characters we meet in Keep You Close are the sort of people you would think twice about but here you want to get to know them as they are all part of the storyline and make for real intrigue. With the story moving back and forth we also get a real insight to the two friends and just how close they really were, cleverly weaved into the story as flashbacks.

The story also looks at various themes including deep friendships the trust and the bond that goes with it also the secrets that close friends tell to each other. Rowan is a really intriguing character and I became fascinated by her. The surprises keep coming in this haunting and psychological thriller. Just a warning this latest from Lucie Whitehouse will deprive of your sleep. You have been warned.

My thanks to Ellen Williams from Bloomsbury Publishing for a review copy.

Keep You Close by Lucie Whitehouse was released on 10 March by Bloomsbury Circus and is available in all good bookshops as well as download for Kindle.