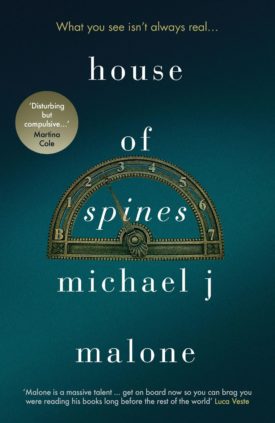 I raved about A Suitable Lie when it was released in September 2016 now Michael J. Malone returns with a terrific psychological thriller House of Spines. It is compelling and at the same time visceral. If you enjoy a thriller with a touch of the ghost story, then read on!

There have been many books through the course of this year that have kept me up into the small hours as I have been unable to put the book down. There is much to admire about how Malone goes about creating his storyline and the characters. With House of Spines you cannot pin down to any specific genre it crosses so many.

Hidden within this gripping storyline are a leading character who you could say is complex to say the least. There are deep hidden secrets from the past and there is something of a Gothic ghost story, so the reader has many elements in this book to keep them awake long into the night.

Our leading character Ranald is a writer that has fallen on hard times and yet Ranald has inherited a house from his great uncle, but Ranald never even knew him. Ranald is a damaged character and I warmed to him despite everything that he was going through and with worse to come you just wanted him to come through in the end. There is some about the property that has the name of Newton Hall, something about this place both intrigued me and yet at the same time worried me. Every room would be filled with books. A writers dream you could say. Yet Newton Hall would have a deep impact on Ranald as there are dark and worrying secrets from the past lurking in the shadows and as Ranald is a fragile character I was becoming really worried for him. Old homes always contain the history of those that lived within, and for generations Newton Hall has been gathering the everything that was wrong for generations lies, secrets and hidden truths. Now for its new owner those secrets are going to pour out of the walls and how would Ranald cope with this. He is becoming more and more isolated and given his history of Mental Health issues Ranald become detached from the outside world and more locked into Newton Hall as he explores the many rooms in the mansion. You have this sense that something is always lurking just below the surface in this story just waiting to show itself. The question you are asking is how does it end for Ranald and his new house? Well that is something you will have to discover for yourselves. I am just going to leave it here.

Credit to Michael J. Malone for handling with such sensitivity the issues of Mental Health that are written into the storyline of the leading character in House of Spines and yet at the same time writing an incredible story that is just fantastic and gripping. HIGHLY RECOMMENDED

Thank you to Karen Sullivan for the review copy of House of Spines by Michael J. Malone.

House of Spines by Michael J. Malone is published by Orenda Books and was published on 15th September 2017 and is available through Waterstones, Amazon and all good bookshops. 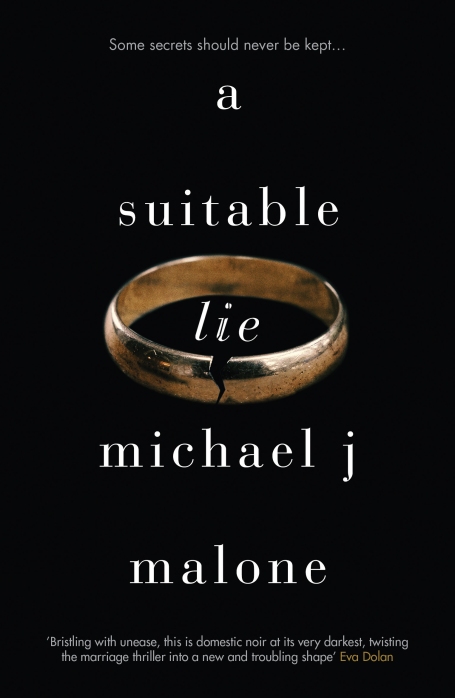 When you pick up a book and within the first few pages you are instantly absorbed into a novel that stops you leaving the house on a Saturday and you don’t leave the book until you have read from cover to cover you know that you have just read one of THE books of the year. A Suitable Lie is that book. A story that is so incredibly powerful and one book that I urge you to read as soon as you can. 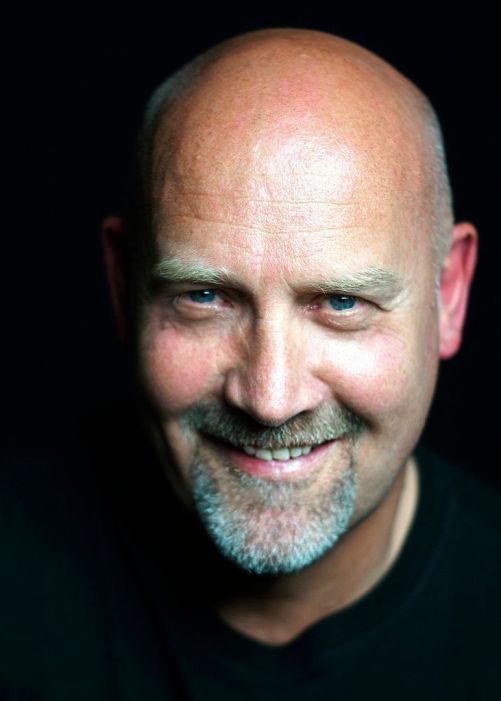 Andy has had to bring up his son alone after his wife died during the birth of their child. He is the sort of guy everyone really likes and you will like Andy when you get to know him. He does not believe he will ever find love again and so he takes every day as it comes and brings up Pat alone. You just never know when love will appear, and one day for Andy is happens by chance and meets Anna and he falls head over heels for Anna and the two fall for each other. The perfect couple in fact. Anna really likes his son and things look really happy for them. But there is something just not right here and you feel it burning into your very soul that something is coming. Andy and Anna marry despite some uncertainty from some close family.

The story then hits you like a heavy weight boxers left hook. You are floored by the story that explodes into life starting on the couples wedding night and from this moment be prepared you will not put the book down, so cancel every plan you have made as you will not want to stop reading. As a reviewer I thought I had read everything, stories that have totally broken me and left me in tears but from this moment I have to say I feared not just for Andy but for his son Pat. They both deserve some happiness and sometimes we are guilty of hoping and clinging to an opportunity of happiness that comes our way. So Now I was not just worried for the two but it went far beyond that. Their story was in freefall completely out of control. I was yelling at Andy from inside of me to just get out and quickly. How the guy that we have come to know with so much self-pride and humour just fade away.

This is a story of abuse and the sort of abuse that goes on behind closed doors, the sort of abuse that makes you sick. Disturbing and shocking and at times I was left reeling. I thought I had read everything. I was wrong. How is this story going to end? I was at times shaking with fear and rage. I wanted an ending that saw some light at the end of the darkest tunnel.

There were times I felt uneasy with the issues that A Suitable Lie raises. But this is a gripping novel so superbly written that it really is difficult to leave. This is a psychological thriller that deals with an extremely difficult storyline but you will love the story of that I am sure. It has become one of my top four books of 2016 instantly. It is a not to be missed novel.

I am not going to give away any clues as to the outcome of this story that would be both wrong and disrespectful but I can assure you that you will not be disappointed.

Thank you to Karen at Orenda Books for the advanced review copy.

A Suitable Lie by Michael J. Malone is published by Orenda Books and is available through Waterstones, Amazon and all good bookshops. 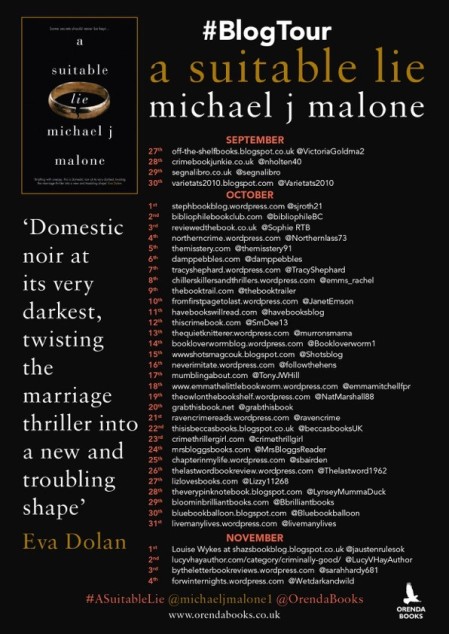