Today I would very much like to introduce a writer that is new to me but I know some already are enjoying his writing. Today Owen Mullen joins me on a guest blog to tell us how he became a writer.  To-date Owen has written two books: Games People Play and his latest Old Friends and New Enemies. 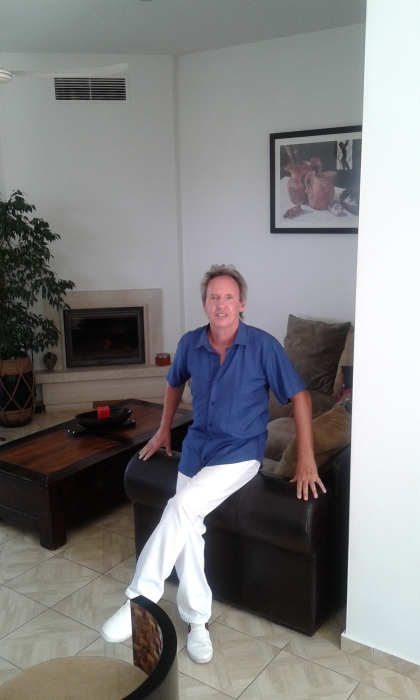 The Bridges We Burn

Looking back, it seems to me that my whole life has been a long series of burning bridges. I have never thought of myself as a ‘risk taker’ although a quick glance at my history tells a different story.

As a teenager I was obsessed with music and formed a band with a couple of friends which led to the re-invention of myself from a short-haired assistant to the inspector of weights and measures [the first job I has after I left school] to a long-haired bass player, travelling the country in a beat-up Transit; singing songs about love – although I’d never been in love – and freedom – without ever having known a single day of oppression in my life. None of that was important. What was important was smiling at the girls at the front of the stage.

After about a year, I packed in the ‘assistant to the inspector…’ lark and went professional; a fancy way of saying we didn’t have other jobs. Years later I went to London, joined other bands and became a session singer. I had already started writing songs with another guy and managed to create a stir. For a while we believed we could crack it. But it didn’t happen. I returned to Scotland.

That was the end of the first re-invention.

Music had been a fabulous distraction but a distraction nevertheless. Without it to give me direction, I found myself singularly unqualified for just about everything so I set to putting that right. In the space of half a dozen years I went from sad old muso to Owen Mullen. MSc DipM MCIM. The transformation was remarkable though it didn’t fool everybody. A colleague saw the string of credits after my name and said. ‘Very impressive. What is it you’re insecure about exactly?’

He was joking but of course he was correct. In an attempt to catch up on the people whose evenings had been spent studying while I was in some garage practicing I had turned myself into an education junky. I gave the textbooks to the charity shop.

The second re-invention had crashed and burned.

For a guy who didn’t think he was much of a risk taker the next move was bold. And how it came to be was positively spooky.

I had left a large local authority where I would, most probably, have a job for life and went to work for one of Scotland’s top visitor attractions. I learned a lot there and met some good people. But I wasn’t happy. My wife, Christine, and I had always been great travellers: India, the Brazilian Amazon, Botswana, Nepal; the list goes on and on.

During one trip to Borneo, we were walking along a rope ladder high up in the rain forest canopy. Christine is much braver than I am; she went faster and was soon way ahead. I looked over my shoulder and saw someone – a woman – coming behind me. When she had almost caught me she said, ‘Excuse me. Are you from Scotland?’

I admitted I was.

This in the middle of the Borneo jungle!

‘You gave me a job. Don’t you remember?’

I didn’t remember and let her go. This happened in Poring Hot Springs on Mount Kinabalu. We went off to bathe in the water produced by the volcanic activity under the earth. In the bath Christine told me she wasn’t pleased.

‘You’re crazy. Don’t you realise what just happened? You’re at a crossroads. We believe there’s no such thing as coincidence. This is synchronicity.  You meet someone who knows you in the bloody jungle – what are the chances? –  and you don’t twig she’s carrying a message for you.’

An hour later, when we were leaving, this woman was waiting by the side of the road trying to get a lift down the mountain. We stopped and invited her to share our car. At lunch she told us her story and the message for me became clear. She had become dissatisfied with her lot in Scotland and had decided to go to Australia: the job, the boyfriend, and everything else were gone as she took a leap into the dark.

I never saw her again but she changed my life. I returned home, put in my notice and started my own marketing and design business. Another re-invention.

For the next seven years I ran that business and liked what I was doing.

But it couldn’t last.

We had just come back from a trip around Europe. One stop had been Athens and the island of Santorini. It was September; the weather was wonderful. We loved it. A few weeks later, in Scotland, an idea came into my head.

‘Why don’t we build a house in Greece and spend time living in the sun?’

Christine thought for a whole five seconds and said, ‘Okay. Let’s do that.’

It took a while and there were many obstacles to be over-come. Eventually we left Scotland for our new home. Re-invention number…Who’s counting?

No sooner had we arrived than the economic climate changed. The dream was in danger of becoming a nightmare. One leap too many perhaps? The gods were angry at me for spurning the many pieces of good fortune they had bestowed on my unworthy – fickle head.

What was to be done?

Christine said, ‘Are you sure. You haven’t really written very much, have you?’

As I write this I am 10,000 words into my seventh book. Two books – Games People Play and Old Friends and New Enemies – are already on Amazon and I am firmly established as an author.

How long will it last? Is this finally it?

I’ll be watching too. And nobody will be more interested than me.

One final thought. I read a quote recently that spoke to me.

“May the bridges I burn light the way.”

Boy do I understand where that guy’s coming from.

Look out for a review of Owen Mullen’s latest novel Old Friends and New Enemies very soon here. Both books are available to buy through Amazon.co.uk  Here