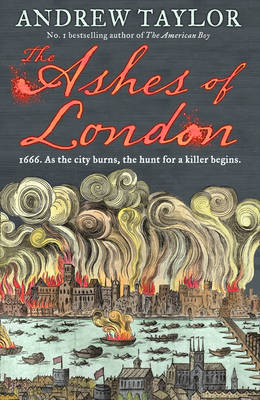 The Ashes of London – Andrew Taylor

Andrew Taylor is a British crime and historical writer, best known for the international bestseller The American Boy and The Fallen Angel Trilogy. But in his latest novel Andrew Taylor turns his attention to a part of London’s history. In The Ashes of London this could well be one his best yet. A murder mystery like no other that I can remember. It is September 1666 The Great Fire of London has been burning for a number of days nothing can stop the flames it consumes everything it its way even St Pauls Cathedral which has been London’s landmark is burning. The immense heat from the flames, the chocking smoke and the crackling of the fire as it consumes the wooden structures. Just a year after the Black Death now London is being destroyed and nothing can be done to stop it. Treasures are going up in smoke. And the people can only stand and stare as their homes are destroyed.

The Great Fire is key to the latest work from Andrew Taylor. As crowds gather to watch St Pauls burning to the ground a young boy breaks through the crowd and wants to run into the burning cathedral as if he is being pulled into the flames but a young man manages to grab the boy at the last moment his name is James Marwood. The boy however is not a boy but a young girl. But before he can find out more she flees from Marwoods grasp and disappears into the crowd of people.

Marwood is now the centre of the story, his elderly father was a supporter of Cromwell and the civil war that saw the execution of Charles I. Marwood has a role albeit a rather junior role within Whitehall but here Marwood seems to spend a lot of time hiding information from his peers. But now a body has been found in the ruins of the cathedral and Marwood has been called in to look at the body but the man did not die in the fire. This was murder. Was the body left there so the fire would conceal the truth?

The character Marwood now goes on to tell his story and the investigation in his own words, which I found I was so well told being at a time when both politics and religion seem to drive the passions throughout the land. The Monarchy is back but the divisions are still present in society and as Marwood finds out there is much at stake.

We meet another character Cat, she has dreams and passions for the future but she is a young lady with intelligence and desire. But now she is in dire trouble and her life is in peril. She has no choice but to run.

The Ashes of London turns out to be a first rate read from start to finish. There is so much detail on every page at times it seems hard to keep up but that is down to the research by Andrew Taylor it is part history and part crime novel of sheer brilliance. The stories of the leading characters and other players involved tell a tale of truths and lies and the detail of London at this time from the buildings to the social times of the seventeenth century. One of my favourite periods in English history so reading this was something I thoroughly enjoyed from beginning to end. This is one book I am delighted to recommend if you are a lover of historical fiction.

One question is will Andrew Taylor be writing more historical fiction from this time in history?

The Ashes of London by Andrew Taylor is published by Harper Collins and is available through Waterstones and all good bookshops.