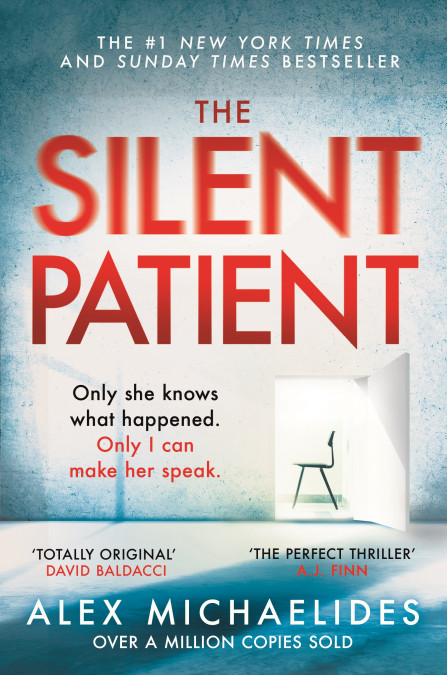 The Silent Patient by Alex Michaelides

Alicia Berenson lived a seemingly perfect life until one day six years ago.

When she shot her husband in the head five times.

Since then she hasn’t spoken a single word.

It’s time to find out why.

I am rather late to the party with this terrific psychological thriller that has now sold over a million copies worldwide. The Silent Patient (Orion Books) by Alex Michaelides can be placed into a number of genres and is a real page turner of a debut novel.

If like me, you have allowed The Silent Patient to pass you by I will attempt to tease you with my review. An absorbing thriller with some more than interesting characters and what an ending Alex Michaelides has written into the storyline.

Alicia Berenson is an artist and seems to have the most perfect life with her husband Gabriel who is a successful fashion photographer. But then one day Alicia shot her husband in the head five times. For a seemingly happy and settled wife to commit this gruesome murder something must have happened. Alicia was arrested and convicted of Gabriel’s murder and sent to a secure psychiatric unit called The Grove throughout her trial she remained silent, never speaking a solitary word.

It is now six years later and Theo Faber arrives at The Grove to start work and he want to try and get Alicia to start to talk. Theo who is a psychotherapist believes he can get Alicia to finally open up and tell the story of Gabriel’s murder. Now the story begins to really get going and you will not want to put this gripping thriller down. The further you get into the plot the more you begin to think that there is more to what really is going on. Theo has his own issues away from work with his relationship with his wife on the verge of breaking down but he is obsessed with Alicia and her story.

Does Alicia finally find her voice and tell the story of what happened and why she killed the husband she loved or does she remain silent. Be prepared for the ending. I never saw that coming at all. The Silent Patient is a really compelling read. Alex Miichaelides has delivered the perfect thriller.

The Silent Patient by Alex Michaelides was published by Orion Publishers and was published in paperback on 12th December 2019 and is available through Waterstones, Amazon and through your local independent bookshop.