On 21 August 1944 German Army Group B was destroyed in Normandy and Allied troops began pressing east from the beachhead they had occupied since the D-Day landings. Within days British troops had liberated Brussels and reached the Dutch border. Encouraged by seeming total German collapse, the Allies gambled their overstretched resources on a high-risk strategy aimed at opening the way into Germany itself crossing the Rhine river.

On the afternoon of Sunday 17 September British tanks advanced into Holland in concert with 1,534 transport aircraft and 491 gliders. Their objective was a series of bridges across the Rhine, possession of which would allow the Allies to advance into Germany. In the event the operation was dogged by bad weather, flawed planning, tardiness and overconfidence, and ended with the Arnhem crossing still in German hands despite an epic nine-day battle that cost the British 1st Airborne Division over two thirds of its men killed, wounded or captured.

Arnhem, the Battle of the Bridges combines analysis and new research by a leading authority on Operation MARKET GARDEN with the words of the men who were there, and provides the most comprehensive account of the battle to date.

With the German army driven out of France and Belgium, the allied forces decided on a bold and brave risk. To take the bridges at Arnhem and thus pave the way into Germany which could prove decisive and shorten the war. 2019 marks the 75th anniversary of Operation Market Garden. I have held back from publishing my review of Arnhem: The Complete Story of Operation Market Garden 17th – 25th September 1944. By William F. Buckingham (Amberley Publishing) until now to coincide with the anniversary. 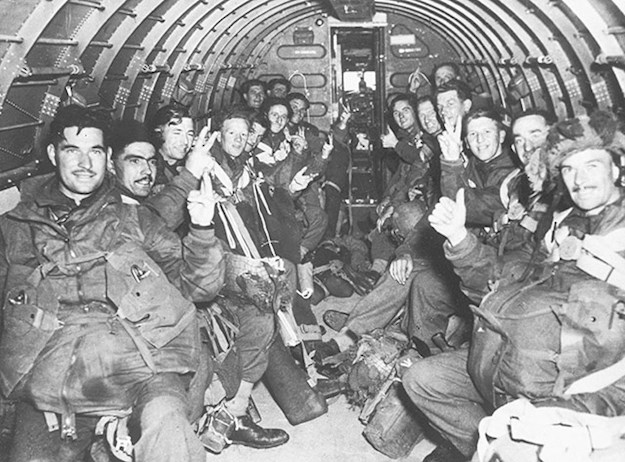 British Paratroppers on their way to Arnhem

It was Sunday 17th September 1944 and the first British tanks started to make the journey into Holland along with over 1500 aircraft and nearly 500 gliders the race was on to capture and hold the bridges over the Rhine which would give the allies a foothold into Germany. This was a bold and brave gamble by General Montgomery his idea of a ‘Single Thrust’ into Germany.

Everything about Operation Market Garden was based on split second timing and there could be no mistakes no delays. Take the bridges and hold until relieved. Not everyone in the Allied Command HQ backed Monty’s plan indeed everything was put into Operation Market Garden including nearly all the fuel was re-directed for the effort. Such a huge operation was fraught with danger and possible failure. In the end it was an epic battle but one of great heroism by the men who fought at Arnhem.

Three major airborne divisions were to take part in Operation Market Garden, from the US the 101st and 82 and from the British the 82nd. They would pave the way for the armoured division of the Guards to race ahead. Everything depended on split second timing and the superior German forces along with SS Panzer divisions practically destroyed the 1st Airborne division. The who operation was sadly doomed to failure. There are many reasons as to why Operation Market Garden failed and military historians for years have written pieces on how and why it failed. Allied Casualties were close to 18,000 as well as around 500 civilians.

Operation Market Garden was a complete failure with around 2,500 British trooped managing to escape back across the river. Many were captured along with the wounded who could not be evacuated. It would be another four months before the allies would cross the Rhine to defeat Germany and bring the war to an end.

I have read many accounts of Operation Market Garden since my younger days but Buckingham’s account is nothing short of meticulous. Absolutely nothing is left out. It is a hefty book at 624 pages but if you want to know everything there is to know about Operation Market Garden then this is the book you want. It is an epic account. The research is astonishing as well as the memories of those who fought an in the battle for the bridges and the civilians who witnessed the battle. There are also many photographs from Operation Market Garden. My thoughts are with the many brave men who fought bravely and never came home. Highly Recommended.

My thanks to Amberley Publishing for a copy of Arnhem: The Complete Story of Operation Market Garden 17-25 September 1944 by William F. Buckingham. Released in Hardback on 15th March 2019 and is available through Waterstones, Amazon and through your local independent bookshop.